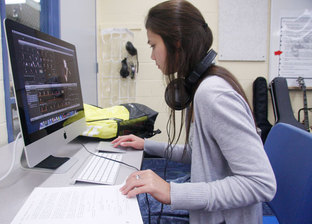 This is an introductory course to digital filmmaking and is a prerequisite to Movie Production Two. Students will learn the language and skills to create their own movies in this 9 week course using digital HD cameras and Apple’s iMovie and Final Cut Pro. Students will work individually and in groups to write, direct, light, and edit their own original productions. We will analyze scenes from groundbreaking films, understand the technology of filmmaking today, and work together to entertain and enlighten the world. This class will culminate in a film festival, and individual DVDs of student projects to use in college applications. After successful completion, interested students can then sign up for Movie Production Two, which is a semester-long course dedicated to creating full-length films.

Course Text:
The Filmmaker’s Handbook: A Comprehensive Guide For The Digital Age by Steve Ascher and Edward Pincus

Essential Questions:
This first unit will spend approximately six to seven class periods introducing students to the language of film and video by screening classic and contemporary films and intensely analyzing their structure and composition. Students will be assessed on their knowledge of film vocabulary, elements of audio recording and editing, as well as story structure, and the various genres of film and video. The summative assessment will be to analyze their favorite film and use the terminology introduced in class.

Essential Questions:
This second unit is based on developing an individual idea or concept for a short video, and then going about capturing it on camera. Students will go through the process of brainstorming, pitching an idea to the facilitator, writing a script, storyboarding, realizing their script on camera, editing their project using iMovie, as well as adding music and titles. This will be each individual’s first opportunity to create a short project, and ample time will be given to the critique of their final projects to create opportunities for improvement.

Essential Questions:
In this short unit, students will practice the various camera moves such as panning, tilting, angle shots, dolly shots, zooms, and hand-held camera work. Students will work to produce a short video in which each of the shots are labelled using titles.

Essential Questions:
Students will practice various lighting set-ups in our studio, each taking on the role of cinematographer while others play the role of actors and grips. Students will learn how to effectively plan a lighting concept for a scene, and then delegate to others to make it happen.

Essential Questions:
Students will complete a variety of editing tasks in order to show proficiency in various editing techniques including fades, transitions, dialogue cuts, montage, jump cuts, and dissolves. Students will also perform various audio editing and mixing tasks to show proficiency in the effective manipulation of sound in film and video.

Unit Six: Putting it all Together

Students will work in groups to write, pitch, produce, and edit a short film. This project will be the culmination of the previous five weeks worth of practice and feedback on smaller projects. Students will be asked to engage the world around them to discover a story that they feel needs to be told. For two to three weeks, students will work to produce a ten to twenty minute production, which we will screen in the auditorium for the community, and air on community access television.

Course Expectations: Do your best, create, start over, fail, and try again.